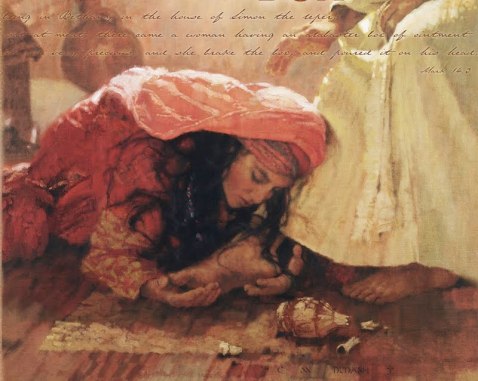 Luke 7:37-48 And, behold, a woman in the city, which was a sinner, when she knew that Jesus sat at meat in the Pharisee’s house, brought an alabaster box of ointment,

38And stood at his feet behind him weeping, and began to wash his feet with tears, and did wipe them with the hairs of her head, and kissed his feet, and anointed them with the ointment.  (The ointment that she used was roughly a year’s wages and in today’s world it could probably cost around 10,000)

39Now when the Pharisee which had bidden him saw it, he spake within himself, saying, This man, if he were a prophet, would have known who and what manner of woman this is that toucheth him: for she is a sinner.

44And he turned to the woman, and said unto Simon, Seest thou this woman? I entered into thine house, thou gavest me no water for my feet: but she hath washed my feet with tears, and wiped them with the hairs of her head.

45Thou gavest me no kiss: but this woman since the time I came in hath not ceased to kiss my feet.

46My head with oil thou didst not anoint: but this woman hath anointed my feet with ointment.

6Now when Jesus was in Bethany, in the house of Simon the leper,

7There came unto him a woman having an alabaster box of very precious ointment, and poured it on his head, as he sat at meat.

12For in that she hath poured this ointment on my body, she did it for my burial.

13Verily I say unto you, Wheresoever this gospel shall be preached in the whole world, there shall also this, that this woman hath done, be told for a memorial of her.

When we look at Matthew 26:7 we see where it was poured on his head. In Luke, we see she stood behind him weeping and began to wash his feet with her tears, and wiped them with her hair and kissed his feet and anointed them with ointment.

Could it be possible that this was the same woman in Matthew and Luke? I think so. In Matthew, she poured it on his head, and I believe she was broken and began to weep and cry so much that she wiped his feet with her hair and kissed his feet and anointed them with ointment.

When she did this people got upset with her. The people became so upset because the ointment was not a cheap ointment and she also broke a custom law she let her hair down to wipe his feet. Plus they could tell that the ointment was expensive because of the aroma that filled the room. She went beyond the extraordinary and broke the box to use the ointment.

So many people are called upon to do something, but because of their unbroken state God won’t use them until they are willing to become broken and step out of their comfort zone and go beyond the extraordinary.

Breaking the box is very humbling, and it helps to stay sensitive to God and helps us to stay close to the Lord.

Once the box is broken, and the ointment is being poured out we will see a move of God in our lives and God will then begin changing us and use us for his Kingdom. Our ointment to God is also giving ourselves to him. Our Praise & Worship to him is the aroma that fills the room, and he created us to Praise and Worship him.

Living for God is beautiful, Precious, extraordinary. He gives us Peace, Joy, Rest for our souls.

I want to share a quote with you from Joy Haney’s book “Breaking the Alabaster Box.”

“Mary could not break the box until first she herself was broken. Because of her intense broken heart she did things that in normal situations she would not have done. It was the breaking in her that changed her way of thinking and her way of doing things. She did something that she had never done before. It shocked those who were in the room with her. There were murmurings and accusations against her; it was a moment in history. No one knew how to deal with this astonishing occasion. Even Jesus sensed the impact of the moment so much that He said,” Wherever this gospel is preached in the world, the story of this woman’s breaking will be told as a memorial to her.”

She went beyond the ordinary. She forged ahead into new territories all because her heart was broken and because of her intense love and reverence for Jesus. Her breaking caused her to do something unusual; it broke all traditions. (Joy Haney-Breaking the Alabaster Box)

I want my Alabaster box to be broken which is my life so that God can use me in the way he wants to. I want to be a living sacrifice that is holy and acceptable to God, which is our reasonable service.

Sherry Hensley is a Pro-Life Speaker in Maryland-Conceived in Rape, saved from an illegal abortion. She is married to a wonderful man who is a minister. She enjoys inspiring others and sharing her faith.

6 thoughts on “Breaking The Alabaster Box”